As you probably know, if you read my blog, I am a huge proponent of the educational value of Twitter. Lately, the excessive and often uninformed news coverage of Twitter is starting to get to me. Last Sunday's New York Times Magazine article, The Chatty Classes, just pushed me over the edge.

Matt Bai, who is not himself on Twitter, writes:

"The capital might be a better place if it became a Twitter-free zone, a city where people spent more time talking to the guy serving the coffee and less time informing the world that the coffee had, in fact, been served." 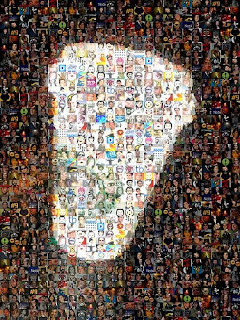 What people don't get is that Twitter is as much about listening, as it is about talking. We may not want to know how our politicians take their coffee, but it might help them to know if their constituents can't afford to buy a cup. Twitter is a tool with the potential to allow our representatives to plug in to the needs, thoughts, ideas and suggestions of their constituents - many of whom are in fact serving them coffee. Arggh!

Image Source: Mosaic from Pedrovisky's photo stream on Flickr.
Posted by Liz B Davis at 10:05 PM

I completely agree. It's more of the same from people who don't "get it". It's not about what you ate for breakfast, but about networking with people who have similar interests. I've also written about this on my blog. See: This Week in Social Media: Political Twittering, Kindle Snobbery and more.

I love how just about every edublogger has recently put out a post on how Twitter can be used to build your PLN (myself included - check out Tweet Me!), and yet the general media continues to report on it as if it were some frivolous fad. The people I follow have added so much to what I do in the classroom. It is a shame that Twitter is not being reported on for what it can do rather than how some are misusing its potential.

I also agree. It seems some in the "media" just don't get it. It amazes me when I think of all the things I have learned from the people I follow on both Twitter and Plurk. Following educators and others in my field have helped me become a better educator and technology user. Thank you to everyone in my PLN.

Participation in Twitter is like many other endeavors in life. You get out of it what you put into it. If you search out people who share information useful to you and take the time to develop a meaningful dialogue with them, it is a marvelous learning tool. if you follow shallow, mundane conversations or the hype of self-promoting celebrities, then you will have a totally different experience.

I actually think Twitter might be the most organic, human and social site I've seen. Unlike blogs, it actually mimics how people talk to one another. Unlike social networking, you are the network, designing the network, creating relationships and connecting. I have to "learn" Facebook and fit within its rigid structure, but I have a certain freedom with Twitter. It's the simplicity of it that makes it real.

i agree with you. this is write most time no one eats alot, or nothing, they just discuss things and work.

Liz: Congrats on being nominated for Blog-o'-the-month JULY at ISTE Island's Blogger's Hut in Second Life! Feel free to visit the blog at "Oh!VirtualLearning!" at http://scottsecondlife.blogspot.com to read about the current May Blog-o'-the-Month, the one in place for June, the line-up for the July vote, and to snag a "Nominated" image if you'd like one :)

You can also grab a SLurl to the blog hut there if you'd like to promote the vote!