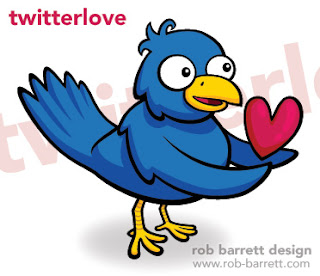 This analogy came to me last night and I couldn't resist telling the story. It is meant as a joke, but isn't there a little bit of truth to all jokes. Do you see yourself in Suzie's story? I have to admit that I do. Enjoy.
The following is a dramatization - names have been changed to protect the innocent.


Suzie remembers when she first met Twitter. Everyone told her she had to go out with him, he was perfect for her. Suzie was skeptical, but she agreed to go on one date. They met for coffee, they talked a little, but there were no sparks. Suzie went home not sure what everyone talking about. She went on with her life and didn't see Twitter again for quite a while.

A few months later at a party, Suzie saw Twitter across the room. He was surrounded by people. They were all talking to him, fawning over him. She still didn't get what the big deal was, but she decided to walk over and say hello. Twitter remembered her from their date and she and T started talking. They had a decent conversation. At the end of the party T asked Suzie for another date, and Suzie agreed to meet him.

T and Suzie met at a nice restaurant, it was busy, but not too loud. They started talking and Suzie found not only was T really easy to talk to, he was also a good listener. On their second date Suzie started to open up to T, she started to share a bit more of her self. She asked questions and was surprised to find T pretty knowledgeable about a wide variety of subjects. Suzie could feel herself falling for him, but she still kept her heart in check.

Over time, Suzie fell deeper and deeper. After several dates, long conversations, and an occasional time when T pulled her out of a jam, she was hooked. Suzie was in love. She was infatuated. She became a bit obsessed. She checked in with T all the time, from her phone, from work, from home. She couldn't wait to see what T had to say. Did he leave her a special message? Did he have the answer to something she just couldn't figure out?

She was in love, but it was also affecting her other friendships. Her friends just didn't get why she was so in to him. She tried to explain, but they teased her about him. A few of her friends took the time to get know him, many didn't. Suzie was ok with that.

More time passed and Suzie fell in to a comfortable relationship with Twitter. She learned how to get the most out of her time with him. She began to feel she could trust him, to know that he would be there for her if she needed him. The intensity of her feelings subsided and a feeling of calm took its place.

Today Suzie and Twitter are still together. Their relationship has deepened and grown. She enjoys her time with him, but has learned how to balance it with the other relationships in her life. She can't remember her life before she met him. She is looking forward to seeing how their relationship will change over time.
Posted by Liz B Davis at 9:04 AM

You have such a way with storytelling! I will RT and RP this!

Love it, Liz - an awesome (and funny) post for this beautiful Friday!
page

T's been putting the moves on me, too ;)

Liz, This is a perfect story. You are a digital story teller. Thanks. I will be sharing this.

Very clever and apt. Have enjoyed finding your blog and now subscribe to it.