5 Things I hate about the Kindle Fire 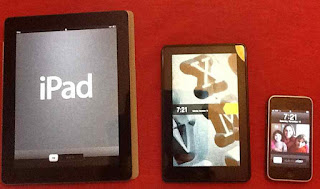 I was ready to love it. I put my name on the list the day it was announced. I waited and waited. When it finally shipped, I tracked that shipment like a hawk. Then it arrived.

My school has recently decided to do an iPad pilot. We are deploying 30 iPads and budgeting for more next year. I thought the Kindle fire might just be a cheaper alternative. Well it's not and this is why.

1. Boy is it heavy! It is supposedly lighter than an iPad, but if you held one in each hand you wouldn't think so. It is shaped like a brick and feels like one too. I tried reading a book on it and my arms felt like falling off.

2. The App store is lame. I admit I am not used to an android device, but I looked for several apps that I use on my iPhone and my iPad and couldn't find them in the Kindle App store.

3. No fetch feature. There doesn't seem to be a way for the Fire to let you know when you have new mail or it is your turn to update your Words With Friends. You have to manually check for all updates. I also can't figure out how to add multiple e-mail accounts to the mail feature. Maybe that is just me being obtuse, but I have looked everywhere for a way to add an additional account.

4. Not so fast. I haven't noticed that the new "silk" browser is particularly fast. Supposedly it is super speedy. It isn't slow, but it doesn't seem much faster than my phone (and I have an iPhone 3GS).

5. It is neither here nor there. It is a smaller heavier feeling iPad and a bigger much heavier iPhone and an eReader with a lot of glare. If I want to type something, or check out some cool Apps, I'll use the iPad. If I want something small to check in on my email, my Twitter feed and my Words with Friends I will use my phone. If I want to read a book, I will use a traditional Kindle. I haven't figured out when or where I would use the Fire.

OK. I know I am privileged to have so many devices to choose from. I know it is a cheaper alternative to the iPad. I know the video streaming is cool. It just doesn't do it for me. And did I mention is is heavy like a brick?

I wanted to like it. I really did. It just doesn't live up. Do you have one? Do you agree? I'm interested in your opinion. Please let me know what you think.

P.S. My fall has been crazy at school so I haven't been blogging, but I have lots of things to share - some cool video projects and some iPad deployment advice, so stay tuned.
Posted by Liz B Davis at 7:36 PM 9 comments: