Counting Down to Edubloggercon East!

Only two more days until the second (annual) Edubloggercon East conference. On Tuesday, July 28th at 9am at the Arlington Room of the Park Plaza Hotel in Boston, MA we will kick off our free unconference where the participants create the program.


Some History:
I attended my first Edubloggercon at NECC in Atlanta in 2007. It was an amazing experience and I was determined to bring it up the east coast. As my Twitter network began to grow, we had a New England Tweetup in Newburyport, MA in 2008. There we talked about running our own Edubloggercon and discussed asking Alan November if he would give us space to hold our Edubloggercon before his Building Learning Communites conference.

I had attended my first Building Learning Communities conference in the summer of 2006. It started my journey into the Web 2.0 world. I joined Classroom 2.0, started blogging, and then Tweeting. I decided what the heck, I would email Alan's people and ask them if there was any space available for us before BLC. At first they responded no, they didn't think so. I was dissapointed, but not overly surprised. At least I had tried. 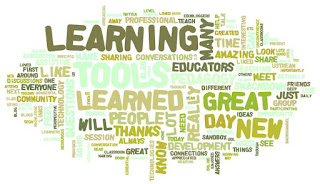 But all was not lost. A day later I got an email that Alan would like to talk to me about my proposal. He was on the way to the airport and asked me to call him on his cell phone (how cool is that). I was kind of terrified, but I called and before he got to Logan he had agreed to give us some space on the Monday before the conference (which started officially on Wednesday).

The rest, as they say, is history...
It was a great day. We had about 30 people and a lot of wonderful conversations.

This year we are meeting on the Tuesday before the conference starts, we have 42 participants signed up to attend and 9 sessions on the agenda. I'm very excited about the event. If you plan on attending please add yourself to the list here. If you can't attend in person, stay tuned to the wiki for links to the Ustream. We will try to stream as much as we can. We will use the Twitter hashtag #EBCE09. Hope to see you there in one form or another!
Posted by Liz B Davis at 11:42 AM 2 comments: