An Interview with Steve Hargadon about the Early Days of Classroom 2.0

I bet in the beginning it was the conversations. Maybe a combination of the conversations and the other members who were already there. Part of it was the network being public and open so you could see without being required to join. You could see who was there and what they were doing. And you didn’t have to join, but it let you see what was taking place. Maybe that was a little bit of an inducement overall and more of a positive. The conversations were really interesting. The threaded forum discussion allowed for conversations to take place that weren’t really fully taking place on blogs. It was a better version of listservs. And I think that was really the magic for Ning. If Ning hadn’t had forum discussions it wouldn’t have been anywhere near what it is because then all of the sudden there were these really interesting discussions that were taking place with lots of people where everyone could participate. And my guess is that that was pretty attractive. You didn’t have to start a blog, but you could actually come in and be part of the conversation. I think the network really benefited from not having any kind of commercial association. Like Wikipedia it was a place you could trust. There wasn’t an overt agenda. It was an experiment in communicating and connecting.

I spent a lot of time sort of tweaking classroom 2.0, phrases, changing it from “friends” to “colleagues.” My guess is that you accumulate enough of those changes and it does make a difference. I had actually been a tour guide for 5 years and so I had some sense of group dynamics. I had to figure out how to manage expectations, help people act thoughtfully to each other. I’ve thought personally that there is that sense of nuance to what’s really going on that helps distinguish a network’s creator/moderator who is able to manage the personality of the network. After you have worked a certain amount of time with a community and there is an established tenor or voice or sense of character to a network, that I didn’t have to be as overseeing. If you go into Classroom 2.0 it tends to be a very friendly discussion. And I think that is because that became the character of the place and people knew it so they supported it.

It was really hard for me to transition from what I felt was being the heart of the network to just being the guy who keeps it going. And now with 40,000 people I’m just shepherding a network now, not a community. This is a network. But to me the power, the backstory there is the power in the tools to communicate outside of traditional power structures and I’m really fascinated by that. These kinds of networks are creating very fertile ground for a grassroots revolution in education.

The value of Classroom 2.0 has shifted to being an example site or a launching place. It needs to be a tool set that early adopters can come in and play with. It can give them something back. They can get some visibility, notoriety. They can get some strokes back. As long as it is a place where a beginner can come and sign up and actually see that there is value in social networking in education, then classroom 2.0 has done its job. 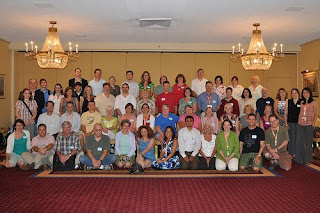 Lisa Thumann and I will once again be facilitating Edubloggercon East at BLC on Monday, July 12, 2010 at the Boston Park Plaza Hotel and Tower, Boston, MA from 9am - 5pm. Come all day, or any part of it! It is absolutely FREE (thanks to the generosity of Alan November!). Please add yourself to the I'm Attending Page if you will be joining us!

The 2010 BLC conference runs from Wednesday, July 14th through Friday, July 16th in Boston, MA. The conference is held in downtown Boston and is sure to be another exciting and inspiring learning experience. Lisa and I will be presenting, along with many other great educational leaders.

EduBloggerCon is based on the idea of an "unconference," and is being organized by the participants in real time on this wiki. Another way to describe this event is as a "collaborative conference," where the conference attendees help to build and create the experience. Different than the inaugural event in Atlanta, we've not actually scheduled any sessions yet, and we're going to do so together as a group at the start of the day--based on the submissions of sessions that attendees have indicated they are willing to facilitate or would like to learn about.

Last year's unconference was a wonderful learning experience attended by educators from all over the country. I hope to see you this July in Boston. It really is a great time!
Posted by Liz B Davis at 10:54 AM 3 comments: