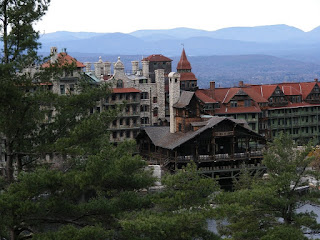 I could hear my heart beating in my chest as I drove up to the Mohonk Mountain House, the site of the NEIT (New York State Association of Independent Schools (N) Education (E) Information (I) Technology (T) conference. I was excited, but also nervous at the end of my 3.5 hour drive. I learned about this conference from the tweets of two independent school educators, Alex Ragone

and Arvind Grover, whom I greatly respect, but had never met.

It has been a while since I have attended a conference without knowing lots of people. I remember back to my first Educon 2.0 when my Twitter network first came alive. Since then, most conferences I attend are filled with real life versions of my virtual learning network. At NEIT2009 however, there was only one person at the conference that I had met face to face before, Kerri Richardson. Fortunately, her smiling face was there to meet me at the registration desk when I arrived. And what followed was everything I had hoped for and more.

The Googlization of Everything.

The message I took away from Siva’s talk is that we can’t stop questioning the corporations that surround us. As Siva put it, “Google has been around for less time than Brad Pitt and Jennifer Aniston were married. Why should we trust them?” We might love Google and what it does for us, but we have to remember that we are not actually Google’s customers, we don’t pay Google anything, we are Google's products. We provide the data that feeds their advertisers. This doesn’t mean that Google is bad, but just that we have to be careful not to get drink the Google Koolaid without also checking to see if it has been spiked.

Next we started the open space portion of the conference. Here people were given blank pieces of paper and markers. People interested in presenting sessions wrote down the name of their session on the paper, announced it to the group and then posted it on the session board. 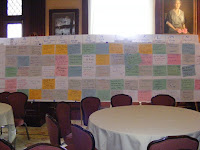 When we began the board had 70 of blank spots. By the end of the conference all but 7 were filled.

After a lovely tea and cookies break, we had our first session. I attended one on problem based learning. Michelle Koetke facilitated this session. She shared a project that she had done with her students on the Images of Girls Online. I learned from this session that an excellent project is driven by an authentic real question. If the question is real enough, the students will drive the project themselves. I think the hardest part is figuring out the best question. That is what I still struggle with. Does anyone have any suggestions for ways to come up with good questions?

More on day 2 of the conference in my next post...

Liz, thanks so much for sharing your NEIT reflections here (I was especially moved to hear about your audibly pounding heart)... I just sent you this via twitter, but just in case you or someone else would find this more readily here, here's a link to a post that seems quite helpful in the "how do I develop great questions" department: